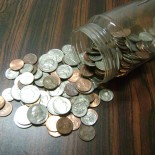 If you get commodities do you have a problem using the cheese in cooking?  Three pounds is usually more cheese than I can eat in a month so sometimes I give a chunk of it to family.   I’ve offered several times to give my SIL part of my commodity cheese but she refuses it.  She tells me that the cheese won’t melt.  She also says she prefers Velveeta because it melts so easily and its easy to slice. I can’t convince her that Velveeta is not real cheese.   It’s milk protein and whey protein from the making of other cheeses and pieces of old cheese scraps.  It can’t be called cheese.  It’s something called “pasteurized prepared cheese product” according to the package.

Would you want to know about a homemade cheese that is easy to spread or melt just like velveeta?  It makes great grill cheese, is good on crackers, and makes creamy macaroni and cheese.  This is an old recipe from the days when gelatin was a staple in all kitchens.  No cook would be without it and used it daily.  Most cheese sold back then was usually a hard cheese which often dried out and cracked.  Frugal cooks found ways to use up dry scraps of cheese rather than throw them out. 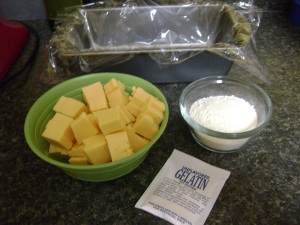 For this recipe you need one packet of unflavored gelatin, 1 pound of commodity cheese (or your favorite) cut into small cubes or grated, 1/3 cup commodity instant milk dry, 1 cup cold water, and one small container lined with plastic. 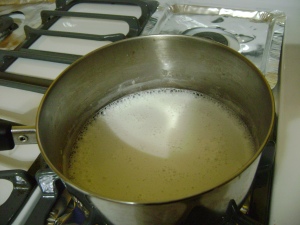 Put the cold water and instant milk into a small sauce pot and mix.  Do not turn on the heat yet.  Next add the gelatin and stir for about a minute to let it bloom. 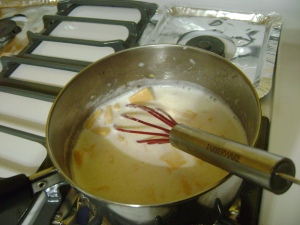 Now add the cheese chunks to the milk mixture and turn on the heat.  Use a low temp and stir often because you want the cheese to melt but not burn. 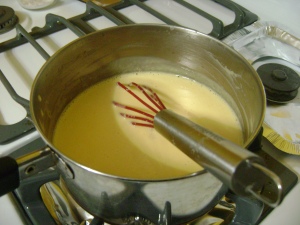 Stir until its all melted and smooth.  Remove from the heat and let set until cool but not cold.  If you can hold your hand to the bottom of the pot and it feels just warm that is cool enough. 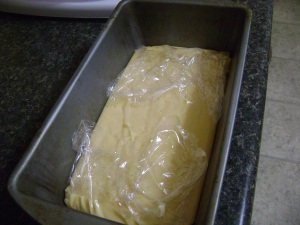 Pour into small loaf pan lined with plastic wrap.  Gently fold the plastic onto the surface of the cheese.  This will keep it from drying out and easy to remove from the pan.  Put into the fridge overnight to cool completely.  Next morning give it a taste test. 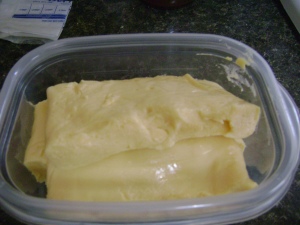 Ok, after I had put the cheese in that bread loaf pan I realized I should have used a much smaller container.  I was only making one pound, not a big loaf.  So, the next day I transferred the cheese to a much smaller container.  This cheese is soft like Velveeta and used in the same way.  If you try this recipe let me know what you think of it.  In the old days this recipe would have been made with old dry bits and pieces of cheese.  Grandma Mama used to save cheese bits in a pint jar.  Some of it she used in soups or stews but eventually she had a jar full.  She put the bits and pieces in milk to re-hydrate overnight before adding the gelatin and heating very slowly.  My version isn’t nearly as good as Grandma Mama would have made using cheddar cheese bits but this works for me.