The downed tree finally got cleaned up.

I went to the new neighborhood farmer’s market yesterday.  I bought two cucumbers, 50 cents each; two tomatoes 1.50 each; two peppers 50 cents each; and eight peaches 25 cents each.  Half of these are for my SIL who asked me to get them for her. So, total spent for me is $3.50.

I was disappointed when I got home and realized these were not home grown as we had been led to believe.  Yeah, I did think they looked too perfect.  These are the same produce found at a grocery store but higher priced.  This is the same produce found at the pop up road side stands found everywhere.  I’m not sure I want to pay extra for the convenience of buying closer to home.  Sure, if these had been home grown I’d be glad to pay a little more to support a local farmer.  I’d even go so far as to buy extra for canning.  But; I’m totally against paying more for store produce just because I live in a food desert.

Now I’m feeling like an idiot.  Apparently its a farmer’s market without the farmer and I should have realized it right away but I didn’t.  I decided to weigh the produce to see what the real cost was for what I bought.  I paid $3 for two tomatoes which together weigh one pound.  So three dollars a pound for tomatoes at the farmer’s market who has no farmer.  Tomatoes are on sale for .99 a pound this week at all the grocery stores.  So for the close to home convenience I paid three times the price.  In the store ad Kroger has local farm grown tomatoes for only 1.99 a pound this week.  Even at that price its less than what I paid at the farmer”s market without a farmer. 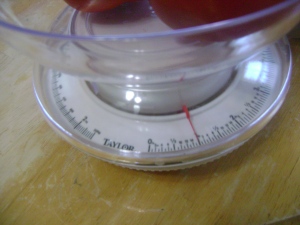 Now lets see about the cost of the peaches.  Hmm… not as bad but also over priced.  Two and a half pounds for two dollars.  That comes to 80 cents a pound.  Peaches are on sale for 59 cents a pound this week.  So for the convenience I paid an extra 21 cents a pound. 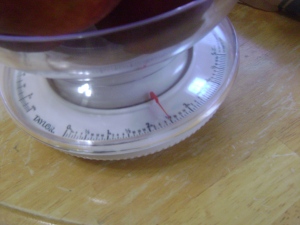 Cucumbers and peppers were on sale at stores cheaper too.  You see why I feel like such an idiot?  Paying extra for food just for the convenience of having it close to home is typical of a food desert.   It makes life very hard when basic needs are way over priced.  Eating healthy is also much more difficult.  I won’t be going back again.  My budget is much too limited to be paying three times the cost for food just because its close to home.

This entry was posted on June 10, 2018 by Anita in COOKING FOR ONE OR TWO, PINCHING PENNIES.